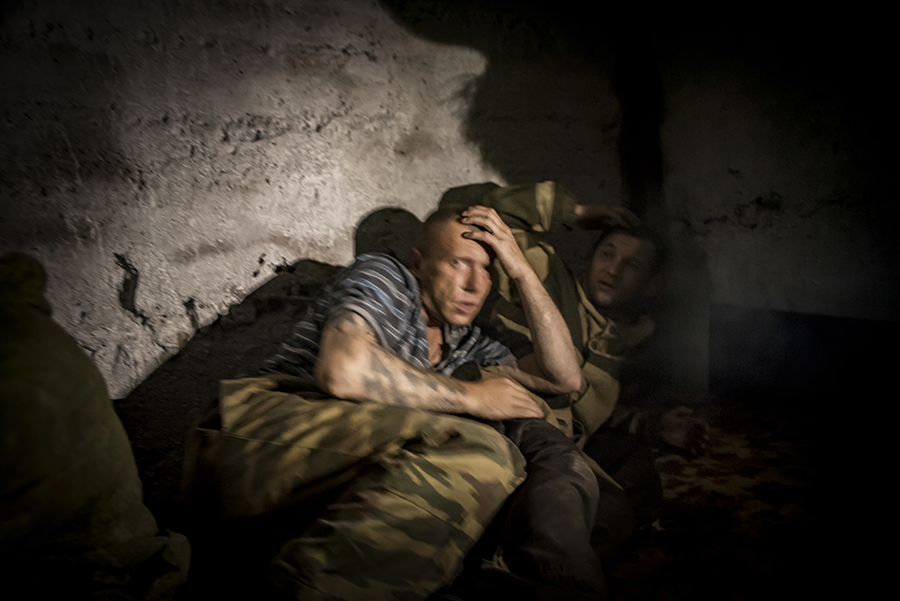 Photo caption: terrified soldier in a shelter during night shellings in Spartak near the city of Donetsk.

Project text: tens of thousands between deaths and wounded, over a million refugees.
The Donbass Civil war, in the eastern part of Ukraine, literally erased from the map dozens of cities and villages, becoming the theater of the first bloody conflict in Europe in the twentieth-first century.
A strange destiny those of Russians and Ukrainians; two populations that, until 1991, were part of the same country, the USSR.
The Euro-Maidan riot of 2014, that led to the loss of power of President Viktor Yanukovych, later triggered a series of chain events that ended in the Donbass conflict.
Despite the numerous cease-fires issued in Minsk, the war is still ongoing since September 2014.
The deadliest conflicts are happening in the outskirts of Donetsk, just next to the international airport.
The airport itself, under the jurisdictions of the rebellious troops since January 2015, set the stage for what was the last pro-Russians troops attack ending with the conquering of the critical railway connections of Debaltsevo. Since then the conflict became a wearing field battle; As it was during the First World War, attacks are preceded by long-lasting artillery fighting and in many cases the conclusion is an advance of few hundred meters.
Since June 2016 the intensity of the fighting grew exponentially, especially in the area north east of Donetsk between the villages of Spartak, Adevka e Yasenavataya.
It is calculated that every day during the summer, each contended exploded up to two thousand artillery shots along the front line.

Giorgio Bianchi was born in Rome in 1973
He has always had a passion for photography to the point of leaving his full time job in Rome to devote himself completely to photography.
After a couple of years in south-east Asia working as assistant with a travel photographer organizing workshops, he finally decided to pursue a career as a photojournalist.
In his photography Giorgio has always paid particular attention to political and anthropological issues and has embarked upon a freelance career to focus on a combination of long-term personal projects and client assignments. He has covered stories in Ukraine, Burkina Faso, Vietnam, Myanmar, Nepal, India, etc.
Giorgio won several international prices and got many public recognitions, and his pictures are regularly published on newspapers and magazines, both on paper and online.
His work was exhibited in many international and national shows.
In the past three years he made several trips to Ukraine where he followed closely the Donbass separatism situation.
Giorgio Bianchi is currently rapresented by Witness image.