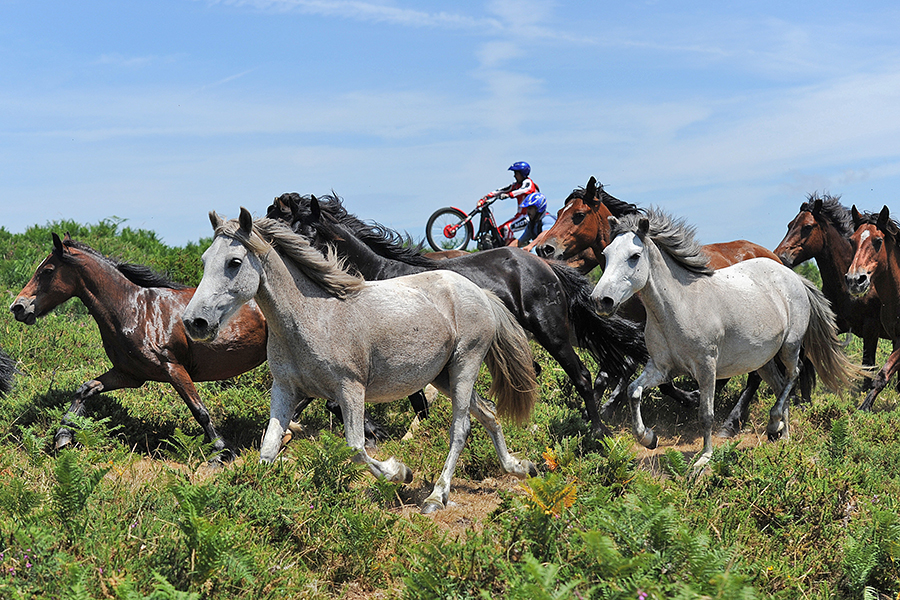 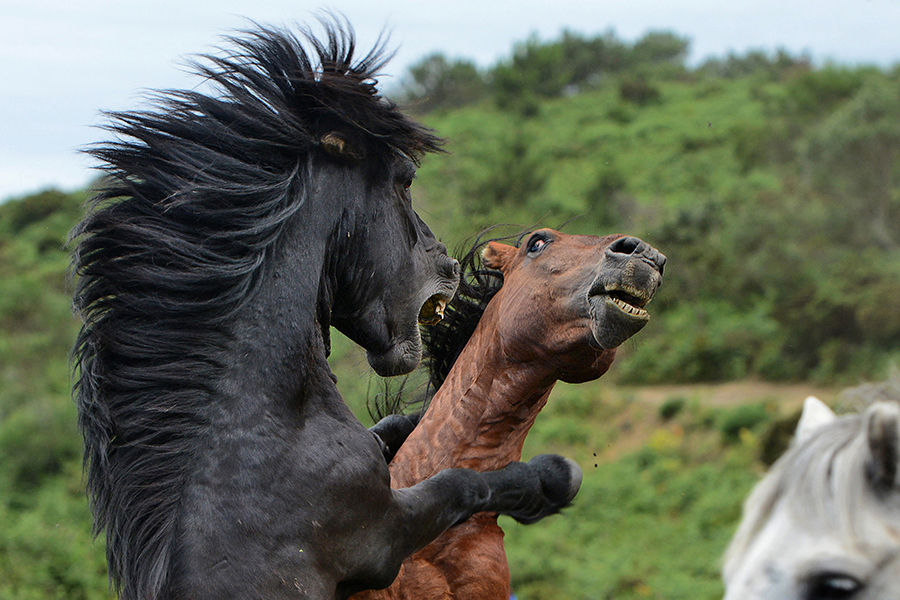 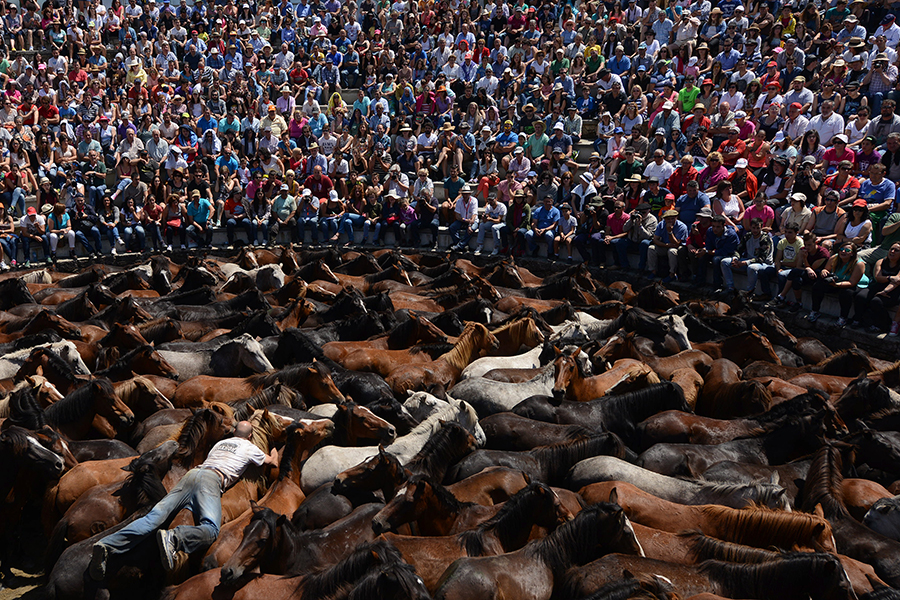 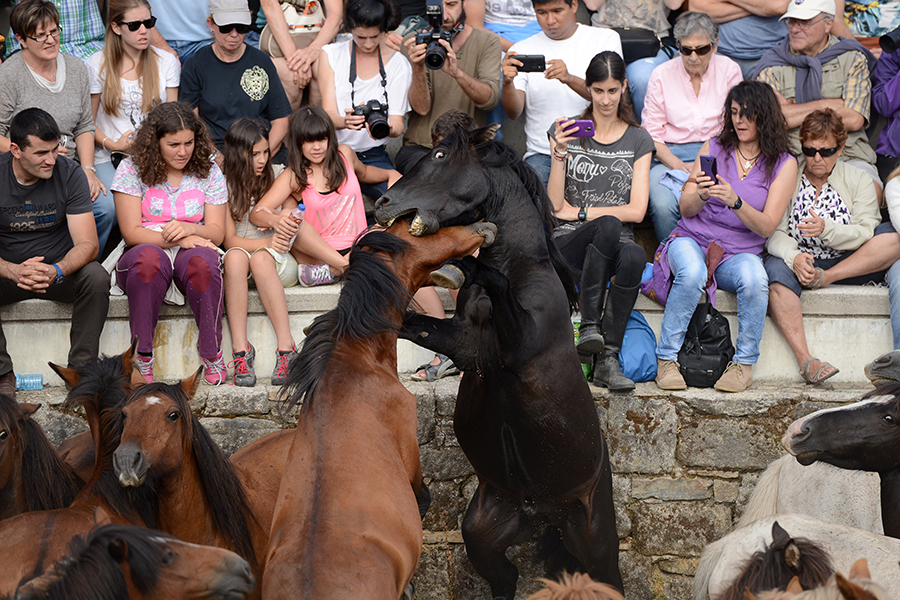 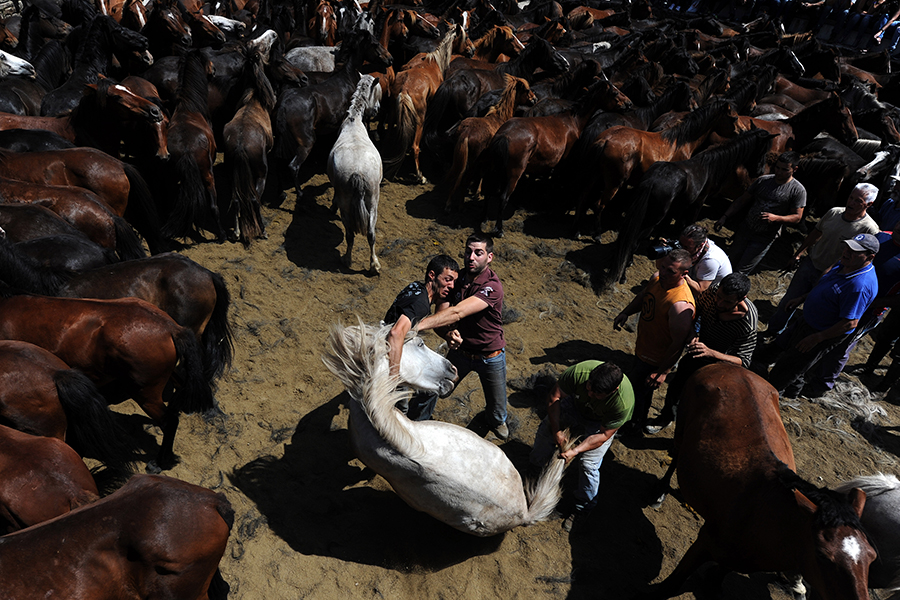 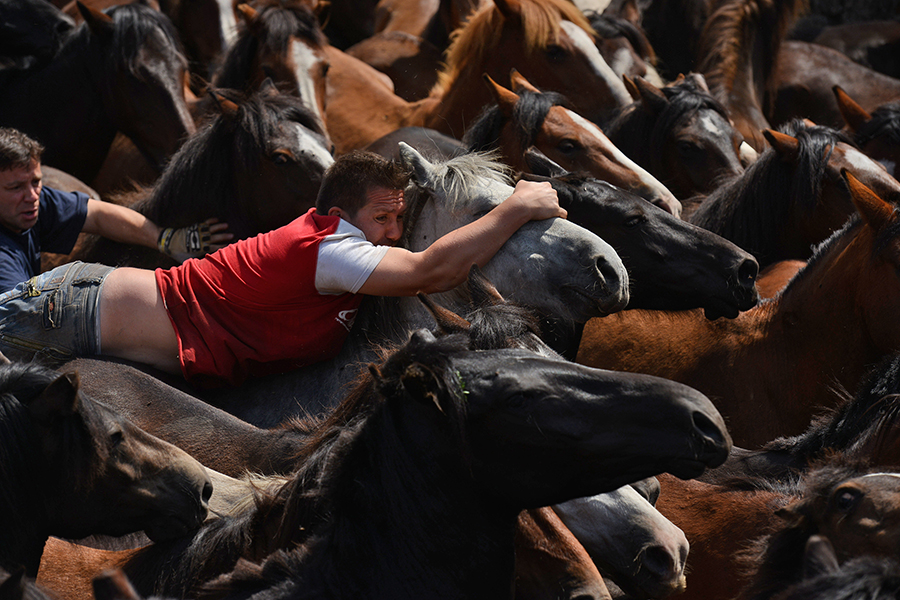 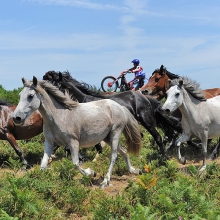 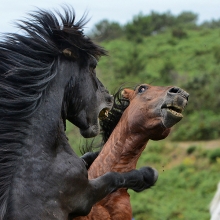 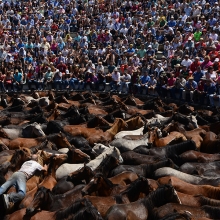 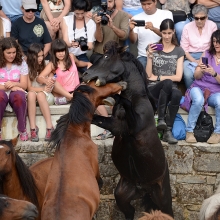 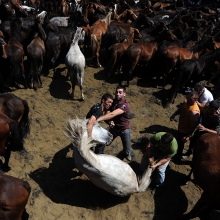 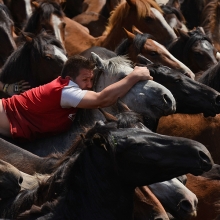 On the first day of Rapa das Bestas a free-living horses are herded into a specially prepared space close to the village.  On the first Saturday of July, a lot of people gather in the village of Sabucedo near the arena where Rapa das Bestas will start. Horses run through the village and are herded into "curro" (arena) everything is echoed by Galician music, cheers and applause. The show gathered over 2,000 viewers. When more than 200 horses is in the arena, foals are separated from mares. Surprisingly very small children takes part in that procedure. Only mature horses are left, it  is so little space that squeezed they begin to fight among themselves. The precipitins choose the largest horses and throw themselves at them. Three to four men trying to knock down a horse, they do not manage it right away. The horse struggling and kicking. One person jumps on a horse, and the other pulls by the tail, hang on neck and mouth, the horse tries to escape is so tight that it needs to jump on the backs of other horses. The horses are intimidated and brutally beaten in their mouths and body. When they manage to knock down a horse, the crowd goes wild. Cheering the riders is endless. The defeated horse has the mane and tail cut off. When finished, the horses are released from the arena, and participants have fun all night to the next day to repeat the spectacle. The event lasts three days. When the festival ends, horses are realised  back to the mountains to leave in peace. Unfortunately next year they will  become an attraction again.

Bartlomiej Jurecki is a graduate of the Cracow School of Art and the State Higher School of Film, Television and Theatre in Lodz, where he earned his Master of Photography. He is a laureate of competitions: Grand Press Photo (3X), BZ WBK Press Photo (7X), Leica Street Photo, International B & W Photography Contest Monochrome Awards (3X), the International Photography Awards (7X), National Geographic Poland (2X), SGL Local Press (2X), Malopolska journalist, National Geographic Traveler Photo Contest. There is also a finalist of competitions: Press Photo of the Year (2X) Competition. Erazm organized by the Association of Polish Journalists. He works in the Weekly Podhalański agency Getty Images Poland and teaches a photograph of the press in the Cracow School of Art.