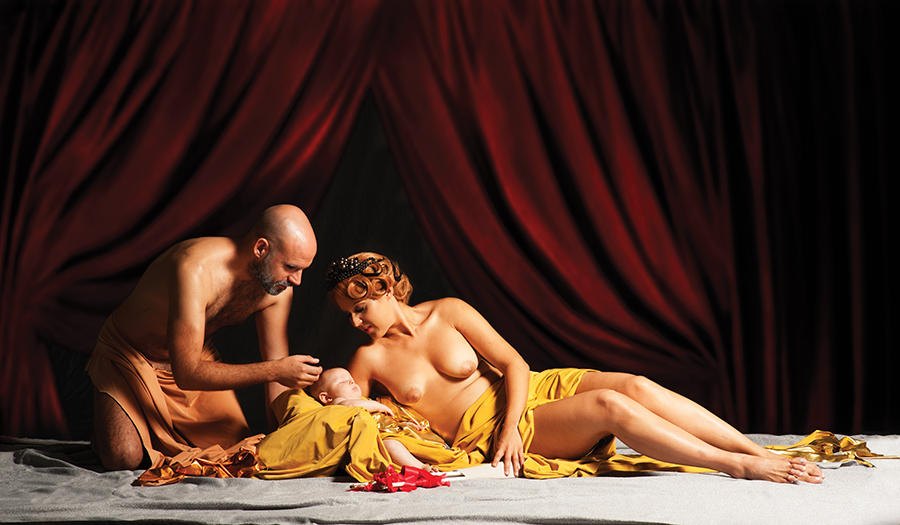 The choice of this work of Jacopo Robusti, "Tintoretto" for the series of reappropriations Lorna Otero two reasons. On the one hand the artist revisits a mythological family -the marriage of Vulcan, Venus and her son Cupido- like many royal families facing conflict situations. Moreover -from absence- evokes the figure of the talented eldest daughter of Tintoretto, Marietta Robusti (Venice, Circa, 1552 -1590), who besides being a virtuoso lute learned from him the pictorial technic with such skill that became his main collaborator. To the extent that one can speak of authorship whose limits are difficult to pinpoint. An "M" in the box Portrait of an old man with a child "before Tintoretto attributed allowed reassign authorship in 1920. The close relationship with his father allowed him to make an unusual learning for women, but he refused to allow him to accept Felipe II invitations or the Emperor Maximilian II to become court painter. And in the marriage contract, he stated that he would never leave his workshop. The young artist died after childbirth, already known as "The Tintoretta". While his own creation is diluted in the workshop of his father just embodying the role of the Muse: artists of the nineteenth century as Leon Coignet and Henry Nelson Raphaelite O'N. They represented the dead in his bed being painted by Tintoretto. Otero is interrogated by his invisible presence in this picture while Venus plays. Bikini marks, contemporary tattoo, are elements outside the time alerting viewers about the game time and roles.

Lorna Otero (Santurce, Puerto Rico, 1979) begins her artistic inquiry at the end of the first decade of the 21st century under the sign of a multivalent search. She moves between various creative fields and in practicing them rejects watertight compartments. Going beyond her life-experience—as a communicator, cultural agent, theater entrepreneur, art teacher for children and plastic artist –her work as a whole spills over the borders between art and pedagogy; science fiction and photography; theater production and installations that combine costume design, furnishings and acting direction with present-day relational art, or theatrical explorations of a sociological nature and performance. All to put forward the whole of a practice that, from its place of origin, deals with questions about today’s global identity in the passage of our time (Adriana Herrera Reyes PHD Curadora).