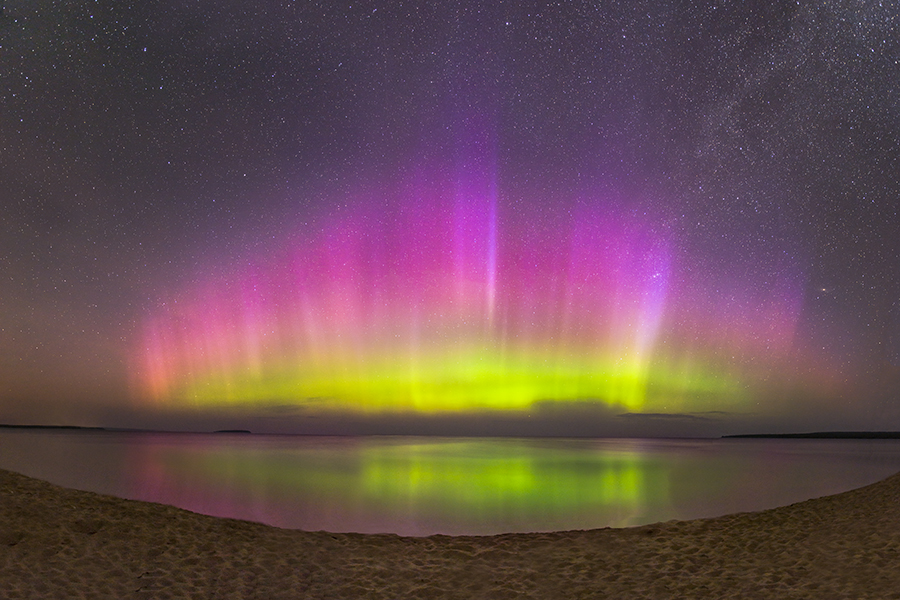 July 12th was a long day. Hiking to Grand Portal Point at Pictured Rocks National Lakeshore, I ended up getting lost on the trail. Hiking 25 miles later with 25lbs of camera gear I made my way back to my car. Exhausted and in pain I drove back to my tent. It was a struggle to make it from my car to the tent. A few moments later some new found friends I had met on the trail invited me over to their campfire just down the road to the next campground. Even though it was painful to walk I didn't want to just let the night get away from me.

I packed up my gear and made my way to their campground. Welcomed with a fire and a beer we sat around the fire sharing stories of our trip. Checking my app for the northern lights I had discovered that they were beginning to fire up. I asked them if they would like to see the lights as excitement rushed through me. Neither of them had seen the lights before and both excitedly said yes. We dashed to the car and made our way to Au Train beach near Au Train, MI.

Parking the car we made our way down the split rail fencing trail to the shore of Lake Superior. We stumbled upon a couple, asking them if they were enjoying the northern lights. They had no idea they were even out. After my first exposure they were so excited they traveled back to camp to get the rest of their family. As they returned the lights began to pinnacle and dance through the night sky. The brightness and color intensity picked up as they began to push south over Lake Superior commanding the entire northern horizon.