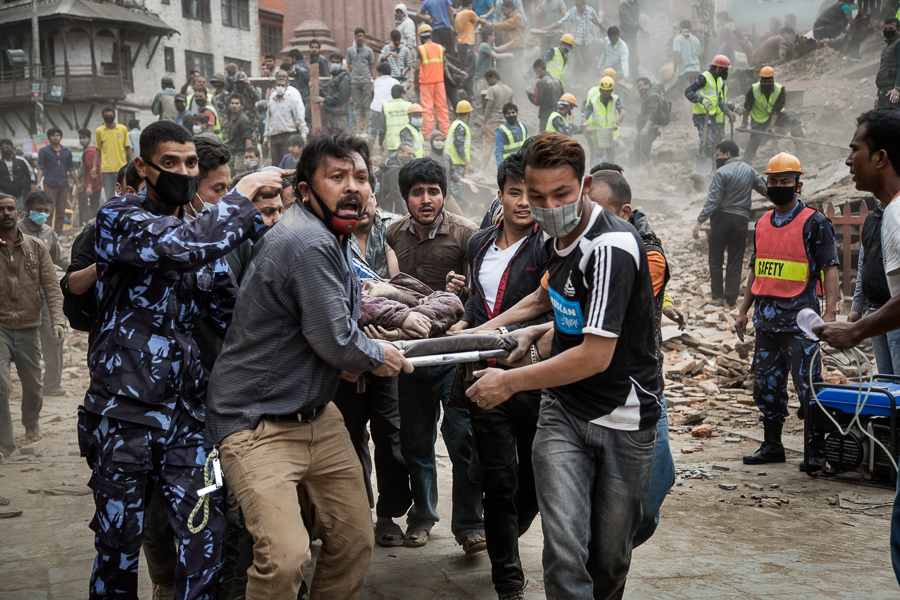 A 7.8 magnitude earthquake struck Nepal on April 25th, 2015, killing over 8,000 people, injuring approximately 22,000 and destroying hundreds of thousands of homes and historical monuments.

As a direct witness being based in Kathmandu, I started to shoot photos of the disaster minutes later. Chaos and dozens of injured and casualties were on every corner, as Kathmandu’s residents fled to the streets to escape the danger posed by damaged buildings. Not long after, Nepal was cremating its dead in massive ceremonies, while survivors set up tents in displacement sites throughout the country.

Despite the trauma, the population became a united family only minutes after the quake, volunteering to dig among the debris in search of signs of life. Although constrained by the size of Nepal’s only international airport, little by little international aid was arriving, which helped intensify rescue efforts resulting in the rescue of people even several days after the quake. Slowly, communication networks were restored, alleviating the suffering of those trying to find their families.

According to Nepali officials, it will cost over USD $6.6 billion to rebuild the country, and at least five years. The quake has pushed nearly one million people into poverty, in a country where the level of poverty was already one of the highest in the world.

Spanish Freelance Photojournalist represented by Getty Images. Based in Kathmandu, Nepal, from 2014 until October 2015, and previously based in Cambodia from 2008 to 2014.

He has worked as a professional photojournalist since 2005, and since 2009, Omar’s full time job has been photography and photojournalism, covering stories in Spain, Thailand, Vietnam, Laos, Myanmar, Libya, Egypt, and Cambodia, the country where most of his stories have been based since he moved to the country in 2008.

Since 2012, Omar has been represented by several international agencies as the French Agency Wostok Press, the Spanish Agency Cordon Press/Corbis Spain, SIPA Press in France and EPA in Thailand. Finally, since November 2013, Omar is represented as a stringer by Getty Images International.

His photos during the earthquake that hit Nepal have been published in thousands of publications around the world, including front pages in The New York Times and stories in TIME Magazine, National Geographic and Paris Match among many others, and have been exhibited during the 2015 Visa Pour l'Image photofestival in Perpignan and the 2015 Photoreporter festival in Saint Brieuc, France.

His stories and photographies have been published in international media, including Paris Match, Al Jazeera, The New York Times, The Atlantic, BBC, National Geographic, Financial Times, TIME Magazine, Los Angeles Times, The Guardian, The Wall Street Journal, The Washington Post, CNN, Stern, Spiegel and Sports Illustrated, amongst many other international media outlets. Omar has also collaborated on many stories with international organizations, including the International Labour Organisation, International Medical Corps, Doctors without Borders WaterAid Nepal, UNICEF Regional Office South Asia, the Cambodian Center for Human Rights among many others.