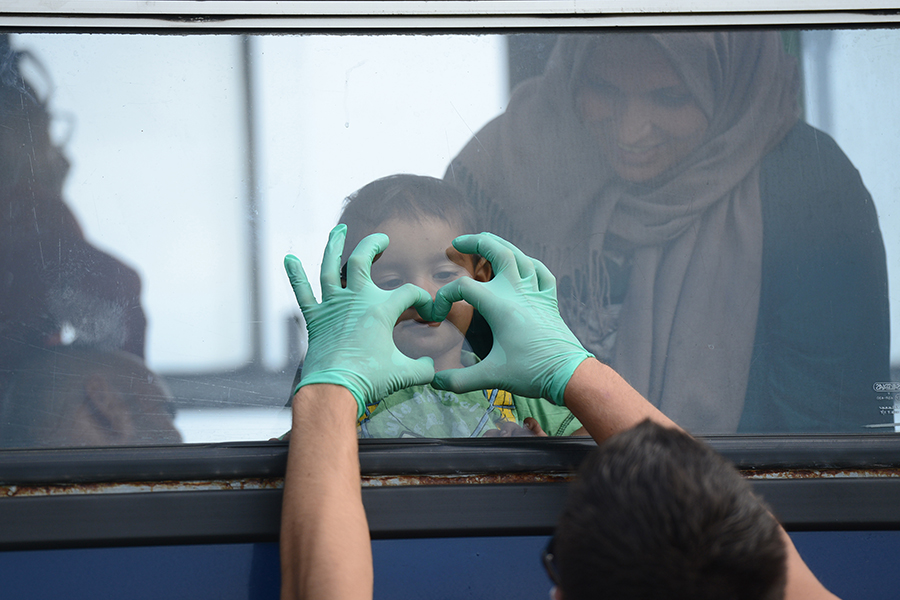 Paramedic shows the gesture of a heart to a little  Syrian boy . He  and his mother went a long way to be in a safe place. In Hungary in the village of Röszke on the border with Serbia, refugees mainly from Syria, but also from Afghanistan are transported by buses to other parts of Europe. Picture was taken 15 September 2015 when many European countries have decided to close the border because of the uncontrolled flow of refugees.
Tens of thousands of war-affected refugees  seek a better life in Europe . Many European residents are concerned about the influx of immigrants with different traditions and what possible influence they can have on European culture . Probably the boy and the medic will never meet again but this positive moment will certainly remain in the boy’s memory. This shows that, among the many opponents of this migration ,  people can be found who selflessly prove willingness to help and give their heart to another person .
Refugees were gathering to get in the bus. It was just a moment when the paramedic wanted to say goodbye and  made a hear shape symbol to the boy. This picture was taken at that moment few meters away from the bus.

Bartlomiej Jurecki is a graduate of the Cracow School of Art and the State Higher School of Film, Television and Theatre in Lodz, where he earned his Master of Photography. He is a laureate of competitions: Grand Press Photo (3X), BZ WBK Press Photo (7X), Leica Street Photo, International B & W Photography Contest Monochrome Awards (3X), the International Photography Awards (7X), National Geographic Poland (2X), SGL Local Press (2X), Malopolska journalist, National Geographic Traveler Photo Contest. There is also a finalist of competitions: Press Photo of the Year (2X) Competition. Erazm organized by the Association of Polish Journalists. He works in the Weekly Podhalański agency Getty Images Poland and teaches a photograph of the press in the Cracow School of Art.